Your Guide To Genshin Impact And Gacha


By now, you’ve probably heard of Genshin Impact. I spoke highly of the game in my review, but that didn’t offer any tips for getting started. That’s what this guide is for! Get ready to learn how miHoYo’s game-as-a-service adventure works. For reference, all my Genshin Impact play has been on PC using a wired Xbox controller, but the game is available on PlayStation 4 and mobile devices.

What Is Genshin Impact?

Genshin Impact is a free-to-play adventure game where you control a party of four adventurers in a big open world. Mini-arenas, small dungeons, bosses, puzzles, hundreds of chests, secrets and more are scattered around the world. It is essentially a game-as-service adventure title with many JRPG, ARPG, and MMORPG mechanics and features, though it is important to note that it is not a MMORPG. As a game-as-service, only two of Genshin’s seven (possibly eight) regions are in the game right now, and that means there is way more of this amazing world coming, in terms of story, characters, quests, areas to explore, and more. You can get a taste of what’s coming in this trailer here. While the trailer is mostly indecipherable gibberish, we can see that we’re going to get a frozen region, an Egyptian-themed area (With an Anubis character? Yu-Gi-Oh baby!), and a lot more. For reference, we are currently on Act 1 … of 8 in that trailer. Wow.

Co-op with friends and random matchmaking is available after around 10 hours, but the game can be enjoyed completely solo. With co-op as it is, there are limited opportunities to engage in it, but it is great to go help friends with weekly bosses or elites. We’ll get to that later. Genshin Impact thrives on discovery, but be prepared for a meaty and overbearing tutorial segment that takes a while before setting you free. Once you’re free, the game really begins, but despite the lengthy introduction many systems are not explained clearly. That’s why you’re here!

Let’s get the wacky monetization model out of the way first. Gacha is, in a word, gambling. In the West, we might think about Gacha like loot boxes. In Genshin Impact, these loot boxes contain both powerful characters and powerful weapons. You don’t need them to win, but there’s nothing quite like “pulling” your favorite character out of a box or landing a 5-star weapon. While not universal, 5-star loot is much better than the other rarities and difficult to acquire outside of the loot boxes, and 5-star characters are generally impossible to acquire outside of the loot boxes. So, you have to gamble to get the best characters and loot in the game. Now, it’s not as bad as all that, as the game does give you a large influx of currency to use on gambling as you level and keeps a trickle going even when you’re not completing an active event. Genshin Impact is one of the fairer Gacha models I have seen in terms of gating gameplay off, but the pull rates for big names are exceptionally poor.

Expect to spend cash if you want to get your favorite 5-star character, and possibly quite a lot of it. Can the game be enjoyed without them? Absolutely. Let’s say you want to get a character. With Gacha games, different “banners” will rotate in and out based on events. Genshin’s currently features Venti, a slick 5-star Aero hero. If you roll on the Venti banner (or any other banner) you will eventually get a 5-star guaranteed. That’s what we refer to as “hitting pity” in the gacha world, where the system eventually takes pity on you and shoots out a big item. Other games employ this as well, like Hearthstone kicking you a Legendary card if you don’t get lucky and unpack one sooner. Saving up a ton of currency and waiting for your preferred character or weapon to be the subject of its own banner is a strategy that we will probably see employed in Genshin Impact. So if you don’t have your heart set on Venti, consider saving your Primogems until new banners come out with high drop rates for someone you love. 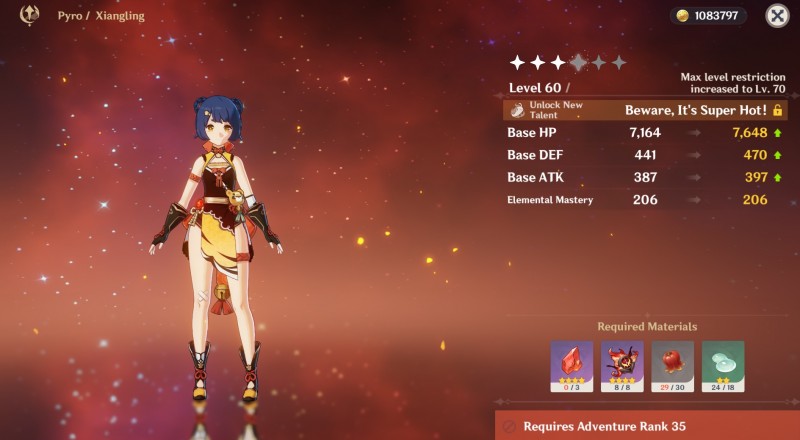 How Do I Level? Monsters Give Me 2 Experience Points And I Need Thousands?

Any experience you get from combat is meaningless. To level up, you’re going to want to use books. Hundred and hundreds of books. You get books out of pretty much every single chest you open and from many other sources. Books come in three varieties, with rarer versions offering more experience. In Genshin Impact, it’s common to go from level 1 to 20, 20 to 40, 40 to 50 etc in a mere seconds. Leveling in Genshin Impact does not work like other RPGs you may be used to. This system allows you to level whichever characters you like the most without having to grind on your entire roster. At various level points, you will be level-capped until you hit a new Adventure Rank.

Think about Adventure Rank like an account level. Your character roster will likely constantly change, but your Adventure Rank only goes up, and comes with a variety of benefits and unlocks. Not only will your Adventure Rank allow you to enhance your character levels, talents, weapons, take on character-specific story quests, and unlock slots to send characters out on expeditions, but it also lets you raise your World Level. World Level is one way that Genshin Impact keeps old areas fresh, by introducing more powerful enemies and leveling up the entire world, it makes it so you will need to make your characters stronger to stay on par, but also adds much better drops to the loot tables, including valuable 5-star items. The more you push your World Level higher, the better stuff you’re going to get even when just cruising around old areas looking for chests and punching abyss mages.

Why Do I Have 4 Characters In My Party When I Can Only Control One?

In Genshin Impact, you can hot swap characters that are in your party at any time. Sometimes, this is because you’re out in the world and found some torches to light with your fire character, a pinwheel to spin with your Aero character, or water to walk over courtesy of your cryo character. There are dozens of elemental applications to interact with in the environments, but the character quick switch has a number of other important combat considerations. Characters like Barbara can keep your crew healed by playing her tune and switching to the injured character, allowing you to basically ignore food. Other characters like Noelle can throw on a powerful protective shield so you can switch to a more aggressive character — while the shield remains.

In general, hitting enemies with various combination of elements causes some kind of special effect like lowered defense, multiple hits, and more. So when you have a variety of elements in your roster, you can dish out huge sums of damage quickly and destroy enemy shields as well. While it’s possible to take out some low-tier goblins or slimes with button mashing, you will want to get used to swapping your team in and out, and firing off their elemental skills to wreak havoc. Some characters that you may obtain early like Fischl or Xiangling have damaging elemental skills that spend a long time in play, allowing you to combine them with 2 or more other effects during their duration. Hot! 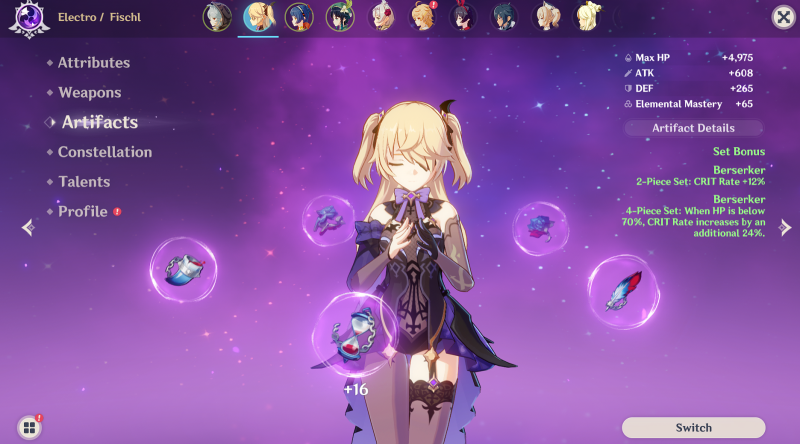 You can think about the artifacts like an armor system from the Diablo series. Thinking about cups and feathers and stuff like that can be pretty abstract and cause you to ignore them. Don’t. Artifacts are your primary source of stats and they also confer set bonuses. You may be tempted to just throw a bunch of +0 artifacts on for a set bonus and stand pat. That’s a bad idea. Level up your artifacts as much as possible, preferably to max, and you will see an absolutely enormous change in your damage output and survivability. For an offensive character, be sure to try to find artifacts with +damage and +% damage on them to make your life much easier. Artifacts are possibly the most important thing you can do to power up your character, and they can be found everywhere in the world, in chests, from enemies, in domains (dungeons), and off bosses. Once your World Level gets high enough or you discover some fairly intricate quests, you can even get 5-star artifacts. Oh, be sure to go talk to the nun in the cathedral in the Monstadt, she will give you a nice 4-star artifact available right at the beginning of the game! 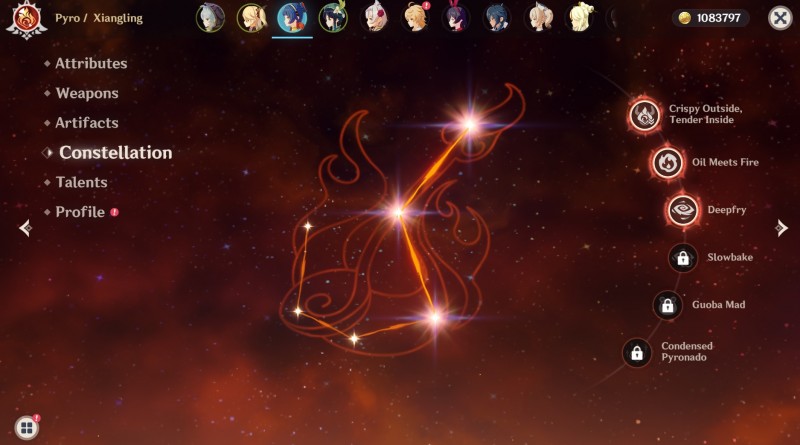 Constellations are sometimes subtle, sometimes significant special bonuses you can unlock on each character. How do you get them? By finding extra copies of the character (often through Gacha). While constellation abilities are not essential, they can often provide powerful passives. For this reason, focusing on a 4-star character can be a much more viable strategy, as collecting multiple copies of a 5-star character is not a viable proposition for anyone but the most voracious of whales.

Since the game doles out characters via events and other activities from time to time, you can likely work up your 4-star cast for free. The exception to the rule is the main character, who you can earn all the constellations for in-game with some dedication. The main character is also unusual because he/she can eventually take on any element, each with its own abilities and constellation. While there are only 2 regions available right now and hence only 2 elements available for the MC, it’s likely the MC becomes an elemental-swapping powerhouse in the future — and one that you can get all the constellations for free! 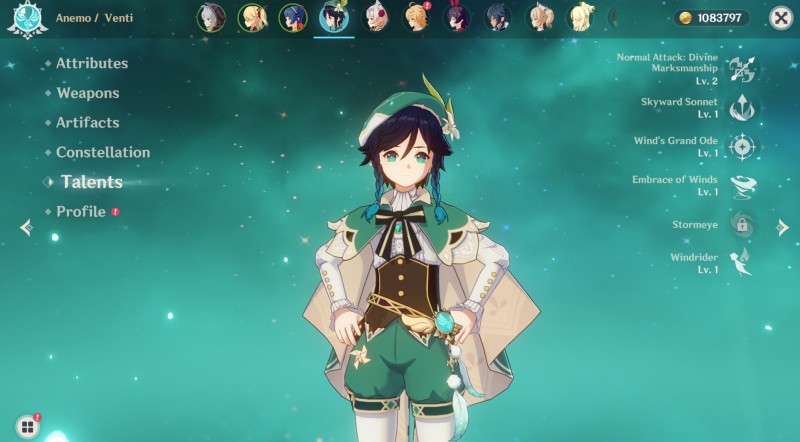 Talents are one of the simplest aspects of your character, adding flat % to things like your basic attack and elemental abilities. When the time comes to level them up, you need special talent books and generally some materials from the world as well. Talent books are generally found in special domains that drop them specifically, with different books available on different days of the week. Don’t forget that you can craft higher-tier talent books (and higher-tier items in general) at the alchemist in any major city by dumping a bunch of your low tier items. For instance, three crappy arrows makes a green arrow, three green arrows might make a blue arrow – you get the idea. This is a great way to put all that farming to work for a boost in power! 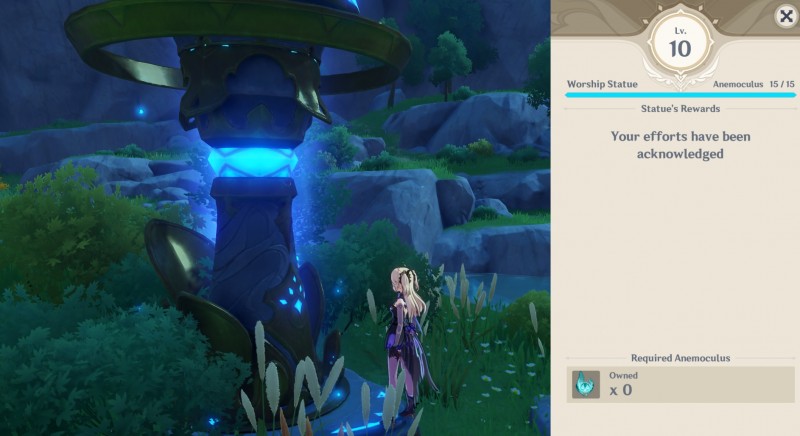 Grab Every Anemoculous And Geoculus

While you’re out there in the great big world, you’ll sometimes see little white stars on your minimap. Stop everything you’re doing and figure out how to grab that little collectible. Oftentimes, there will be a puzzle to solve, a great cliff to climb and snag it in the air, or some other foible to discover the exact location and way to grab it. Collecting these objects and turning them in grants you a bunch of resources, but the most important aspect to each round of turn-ins are permanent stamina boosts that will let you sprint/climb longer, glide further, and even give you more options in combat. Some of these are challenging to figure out, but you’ll thank yourself later if you snag them the first time you see them instead of combing the land later, trying to find the errant geoculus that you passed by the first time.

That should be enough to get you started! If you find yourself enjoying your travels and powering through the Adventure Ranks, you’ll start taking on elite enemies, world bosses, and even venturing to the Abyss!